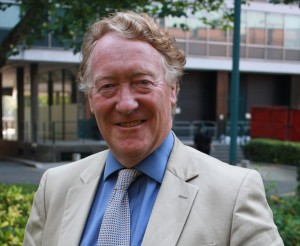 The future of 400 police officer posts is hanging in the balance in the Prime Minister’s home force because government cuts “have gone too far”, a Conservative police and crime commissioner has warned.

Thames Valley Police – also the home force for the Home Secretary – may face losing one in every ten police officers, Anthony Stansfeld (pictured) said, because of “extraordinary” budget cuts. Mr Stansfeld said he was unable to identify any other way to save half of a further £40 million budget cut expected under Treasury forecasts.

The commissioner insisted the force – which polices David Cameron’s seat in Witney and Theresa May’s Maidenhead constituency – would see a continuous drop in crime rates begin to “reverse” as a result.

“There will be across-the-board cuts on most, if not all, types of policing.”

Mr Stansfeld said the prospect of losing so many officers meant it might not be possible to “keep a lid on” crime in larger towns in his area, including Slough and Reading.

“It’s extraordinary that the Home Office thinks we can just keep on cutting. I think it has gone too far. There is a real crush coming. Not just in our force, but in others as well. Smaller forces, in particular, are simply not going to be able to meet the levels of cuts that are being demanded.”

“In towns such as Reading and Slough, which have some highly transient populations, we’ve made great progress in cutting crime. We’ve also invested to combat crimes such as child sexual exploitation. And I’m concerned that such investments will be endangered by the cuts.

“We will see the very considerable decreases in crime which we have been able to make begin to reverse,” he told the Telegraph newspaper.

Sara Thornton, chief constable of Thames Valley Police, said she was doing everything she could to ensure the force did not lose the officers.

She said: “While I agree that the prospects for the next spending review are bleak, may I reassure the public that we are not poised to lose 400 officers. We need to find another £20 million of cuts by 2018 but I and the Police and Crime Commissioner will be doing everything we can to find those cuts elsewhere and maintain police officer numbers as much as possible.”