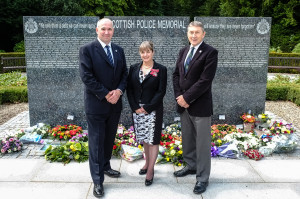 All present paid tribute to the officers whose names are engraved on the Memorial.

After a poignant service of remembrance, a number of survivors and some of those who had helped make the day so special were introduced to Her Royal Highness by Christine and Stu.

After the service, Denis said: “It was a pleasure to return to the Scottish Police Memorial. Once again, a very poignant service made all the more special in this, its 10th Anniversary year by the attendance of the HRH The Princess Royal.”

Christine, also Co-founder of COPS, said: “The memorial is a tangible reminder to the families that their loved ones name will never be forgotten and will live on not just for this generation but for every generation to come.

“We are honoured that HRH, The Princess Royal was able to join us again today, her support for the families and recognition of their loss is much appreciated.”

Sir Stephen House, Chief Constable of Police Scotland, said: “Police officers are committed to serving their local communities, protecting the public and keeping people safe. The officers we are commemorating today made an important contribution to the communities they served.

“It is right that we should honour them and that their names be added to the Scottish Police Memorial, a fitting reminder to us all of their contribution to the service and to Scotland. Our thoughts are, as always, with their families and friends.”