Home Secretary: “Merging forces is simply not the answer” 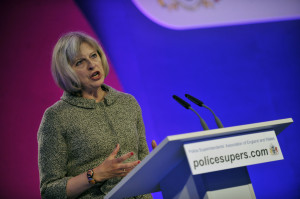 The Home Secretary has rejected calls to reduce the number of police forces in England and Wales in order to save money to reinvest in frontline policing.

Theresa May (pictured) told the Superintendents’ Association’s annual conference in Warwickshire that “the evidence is clear – big, top-down restructure is simply not the answer” when it comes to saving money in policing.

She was responding to comments from Irene Curtis, president of the Superintendents’ Association, who said millions of pounds of public money is “going to waste” each year by maintaining 43 police forces in England and Wales.

Ch Supt Curtis said the country has “too many chief constables and too many police and crime commissioners, costing too much” at a time when operational policing budgets are facing threat.

Ch Supt Curtis said: “It is increasingly obvious that we do not need 43 forces across England and Wales. Some argue that the cost of restructuring forces would be too high, but in a future of reduced resources I think the opposite is true: we can’t afford not to do this.”

In response, Mrs May said: “I know that some people, including the Superintendents’ Association, have said that we must revisit the debate about the 43 force model and think about doing more at a regional level.

“I have always said that if forces come to me with a coherent and comprehensive plan to merge forces at local level with local support, I would consider it. That invitation remains open.

“But let me be clear – no Chief Constable or Police and Crime Commissioner has come forward in the last four years with a jointly agreed proposal, viable or otherwise, to merge with another force.

“And in fact the opposite is true. Chief Constables and Police and Crime Commissioners are demonstrating that all the perceived benefits of mergers are possible without sacrificing local accountability and identity.”

Concluding her speech to the conference, Mrs May said: “My reforms are about making the police better – better for you, and better for the public… We have achieved a great deal, but there is still a long way to go.”

“Mergers could aid procurement and provide forces with greater flexibility. Forces are doing their best to protect their frontline services but cracks are beginning to appear. In the absence of additional funding, some forces may need to consider merging as an option.

“However, any changes of this scale must be undertaken with proper public consultation and must not affect the level of service communities receive.”