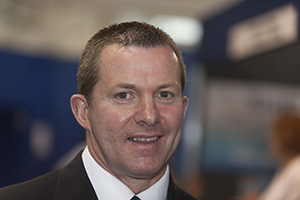 An “incredibly important day for the families of police officers” is how this year’s National Police Memorial Day has been described by the event’s founder.

There are less than two months to go until this year’s Memorial Day – to be held in Belfast’s Waterfront Hall on Sunday 28 September. Sgt Joe Holness, (pictured) who has run the event for 11 years, said the “day reminds us of the best of British Policing”.

Between 10 and 15 officers are lost on duty in the UK every year, according to organisers of the day.

The prestigious Northern Ireland ceremony, which will be held will be attended by members of the Government, senior officers and of course the families of fallen officers.

Sgt Holness, a Kent Police officer, said: “The National Police Memorial Day is an incredibly important day for the families of police officers. The day reminds us of the best of British Policing, it reminds us of what is best about public service and the high prices which is all too often paid by police officers and their families for that service.

“We lose between 10 and 15 officers every single year, often in very brutal circumstances. Our goals are to serve the public, keep communities safe and every year colleagues die defending that oath, so it is important we remember police officers who have lost their lives in the line of duty and ensure they are never forgotten.”

Around 2,000 attend the service, which is open to everyone from the police service.

Sgt Holness added: “The British Police Service is renowned worldwide and its unique and priceless reputation is entirely a reflection of the professionalism of the man and women who proudly perform the role.

“Sadly, each year police officers give their lives in order that we may live in peace. They place the safety of others above that of their own – they do so with pride and because they are the best.”

To attend, you must register in advance by emailing nationalpolicememorialday@polfed.org or call 07843 292 958.