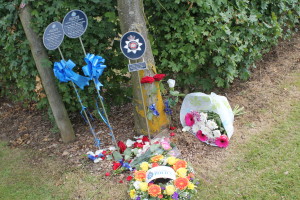 Tears were shed as surviving family members and serving police officers gathered at the National Memorial Arboretum on Sunday July 20 to remember officers who have fallen in the line of duty.

The emotional annual Care of Police Survivors (COPS) Service of Remembrance in Staffordshire was attended by more than 500 people. Events took place all weekend for surviving family members.

It was the biggest ever COPS weekend.

During the 60 minute Sunday service, which was overseen by COPS’ chairman Jan Berry, survivors – a wife, a mother, a sister and a daughter – recalled how the charity had helped them in their time of need.

Chief officers from all UK forces, the Home Office and staff associations were amongst those that took time to pay their respects and lay wreaths (pictured). The West Midlands Police band and a lone piper provided accompanying music.

The Roll of Honour for the eight police officers and one member of staff who died on duty during the last 12 months was read out by outgoing COPS’ president Sue Brace. Those remembered this year were PCs Shazahan Wadud and Andrew Duncan, of the Metropolitan Police, PCs Tony Collins and Kirsty Nelis and Captain David Traill, all of Police Scotland, DC Adrian Grew, of Kent Police, PC Michael Chapman, of West Midlands Police, PC Mark Murtagh, of Police Scotland, and DC Sharon Garrett, of Cambridgeshire Constabulary.

Vicky Moore, daughter of PC Bryan Moore of Leicestershire Police, was given a loud ovation after her speech and poem. She was 10 when her father was killed by a drunk driver in 2002.

She said: “I did not understand the hero my father was until he made the ultimate sacrifice. Once I heard the stories of the amazing work he had done within the community I regret it was too late to tell him how proud I am of him.

“It shouldn’t take stories like ours for other people to realise the sacrifice in police work.”

Prior to the service, The Blue Knights motorcyclists arrived in procession to pay their respects, they were also joined by officers on the UK Police Tour cyclists who had ridden up in convoy from London.

This year there were also around 50 frontline officers who formed guard of honour a as a result of a Twitter campaign to get more rank and file officers to the event.

Closing the event, Jacqui Cheer, chief constable of Cleveland Police, paid tribute to the “dignity and bravery” of surviving families.

She said: “Over the years I have unfortunately lost several friends and colleagues who have died whilst on duty… to my great shame I just assumed that the families were supported…”

She concluded: “I ask colleagues to ensure that we actively spread the word about COPS and fully support the charity.”