“A reminder to the public of how dangerous policing is” 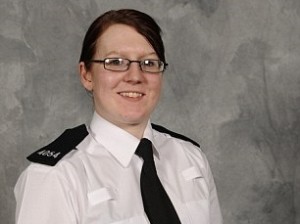 The West Yorkshire Police officers who were attacked by gunman James Leslie will bear the physical and mental scars long after the court case has concluded.

Nick Smart, chairman of West Yorkshire Police Federation, was talking as Leslie was convicted of attempted murder at Leeds Crown Court on 30 July.

Leslie, 38, shot PC Suzanne Hudson (pictured) through his front door as she and colleague PC Richard Whiteley made routine inquiries about a neighbour dispute in Leeds last December.

He laughed as he rode off on a bicycle asking: ““Do you want some more, you pussies”, the court heard.

Mr Smart said: “Their care and welfare will continue long after this verdict. The physical and mental scars that remain mean that they will need the help and support of their federation and families for a long time.

“This is a reminder to the public of how dangerous policing is. There is no such thing as a routine call. It is a dangerous job and things like this go on up and down the country all the time. The threat is always there.”

Mr Smart added that had it not been for the quick thinking of PC Whitely, this could have been “another Manchester”. In 2012, PCs Nicola Hughes and Fiona Bone were killed by Dale Cregan in a gun and grenade attack while responding to a report of a burglary.

He added: “Despite the constant negative national media stories about policing, this incident acts as a pertinent reminder that the actions of PC Hudson and Whiteley are representative of the bravery and conduct of the vast majority of police officers who serve their local communities.

“There is no such thing as a routine call or stop. It is a myth.  Every call has the potential to be life threatening for police officers, as it was in this case. These types of incidents are becoming far too frequent where officers are deliberately targeted and their lives are placed in mortal danger.”

Richard Wright QC, prosecuting, said: “It is simply a matter of luck that the defendant did not kill PC Hudson.”

PC Hudson needed emergency surgery on arteries in her neck after the shooting. Her right hand was shredded by the shotgun pellets.

After the shooting, PC Whitely grabbed his colleague and dragged her onto the main road while he radioed for help.

PC Whiteley told the jury: “He brought it (the gun) up to make it quite clear he had it. I thought he was going to use it again on us. I thought I was going to die. My life flashed in front of my eyes.

“I thought Suzie was as well. I thought, he has used it once, he is going to use it again.” PC Hudson had 80 pellets removed from her hand and her cartoid artery and jugular vein had to be repaired by a surgeon.

Leslie, of Cardigan Road, Headingley, was convicted following a trial at Leeds Crown Court.. He will be sentenced in October.

Mr Smart concluded: “We hope that when Lesley is sentenced the full weight of the law will be applied.”