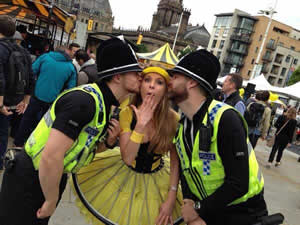 West Yorkshire Police officers who worked hard over the Tour de France policing operation can be proud of their contribution to a “real policing success”, a senior officer has said.

“Everybody involved in planning and delivering this incredible event can be very proud. It has been a real privilege to be part of it.”

The spectacular occasion passed smoothly as millions of residents and visitors were kept safe at the historic event.

It took more than a year to plan the operation, which was co-ordinated in conjunction with the French police and the Gendarmerie, who were also deployed to the race route.

ACC Milson, who coordinated the event, added: “From a policing perspective, it wasn’t just about making sure this world-class sporting event was delivered safely. We wanted to do it with a smile on our faces and really embrace the feel-good factor associated with the Tour de France.

“The team work between the three police forces of West, South and North Yorkshire has been very impressive throughout and I thank all the officers and staff for their outstanding contribution.

Annual leave and rest days were cancelled to ensure there would be sufficient officers to police the event on 5 and 6 July as cyclists raced from Leeds to Harrogate via the Yorkshire Dales National Park and then from York to Sheffield.

It marked the beginning of a busy summer for the force, which will also be facing the Chapel Town Carnival, the Leeds Festival, the start of the football season and other events over the next few months.