Get the Guitar! Busking Bobby proves an internet hit 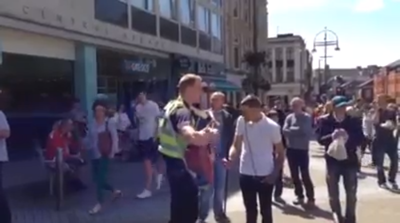 A Leeds neighbourhood policing officer has become an internet hit after he entertained Tour de France crowds with an impromptu busking session.

PC Will Medley, from the City Neighbourhood Policing Team, burst into song after ‘commandeering’ a busker’s guitar while patrolling the city centre as part of the policing operation for the Grand Depart earlier this month.

His accomplished rendition of Stealers Wheel’s ‘Stuck in the Middle with You’ was filmed by colleague PC Matt Thirkill in Briggate and posted on the neighbourhood policing team’s Facebook page www.facebook.com/WYPLeedsCity where it has proved a massive hit.

Comments left by Facebook users said: “This is absolutely brilliant, what a legend,” “Great to see this kind of interaction” and “PC Will Medley – one of the nicest people you’ll ever meet.

PC Medley, who has played the guitar for nearly 15 years and used to play in a band, said: “There was a great atmosphere in the city centre for the Tour de France and when I was on patrol in Briggate a busker asked me if it was okay to play.

“I had a chat with him and told him that I played the guitar. He asked me to play a song so I obliged. There weren’t that many people there at first but when I started playing a crowd started gathering and showing support. Someone shouted ‘get on the microphone’ so I did.”

Sergeant Andy Berriman said: “We did joke that Will is now wanted as the prime suspect for an offence of theft of limelight but the public’s response both at the time and to the Facebook posting has been fantastic. It is without doubt the biggest response we’ve had to anything we’ve posted on our Facebook page and the comments it has received are overwhelmingly positive.

“We set out during the Tour de France to show the human face of policing and that clearly came across with officers getting into the spirit of the event in Leeds and further afield.”