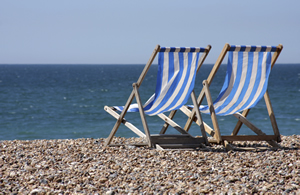 West Yorkshire Police Federation has called on schools in the area to allow officers to take their children on holiday during term time when there are “exceptional circumstances.”

The Police Federation has warned that with falling officer numbers and leave increasingly being restricted for officers during school holidays, many bobbies are being left with no option but to go on holiday during term time.

With events like the NATO summit in Wales and the parading season in Northern Ireland – combined with the demands of day to day policing with shrinking officer numbers – cops across the country are finding it harder and harder to take holidays.

Ned Liddemore, vice-chairman of West Yorkshire Police Federation, said: “Sometimes with operational commitments up and down the country – as well as in West Yorkshire – our officers are left with no option but to go on holiday during term time.

“There are rising commitments and falling officer number so the demands on those remaining are increasing.”

But the law states that if parents in England and Wales fail to ensure their children attend school, they may be issued with penalty notices of £50 to £100. Prosecution can result in a fine of up to £2,500, a jail sentence of up to three months or a community sentence.

Mr Liddemore added: “Officers have a right to a work/life balance and time with their families like everyone else.

“We are not asking for a routine exemption from the law and the fines, we are asking that where it can be demonstrated that an officer has made all reasonable attempts to book his or her annual leave in the school holidays – and they can’t get it or it is cancelled – then they should not be fined for taking their children out of school.

“We are only seeking an exemption in exceptional circumstances.”

Steve Evans, lead on professional standards for the Police Federation of England and Wales, said: “If the job has put officers in that position [where they cannot go away outside term time] they should not be punished for it. It is just logic. Everyone has a right to a family life.”

Sir High Orde, ACPO president, wrote to then Education Secretary Michael Gove earlier this year asking if he would grant officers “exceptional circumstances” and allow them to go on holidays during term time if they were unable to do so during the regular holidays “due to their policing duties”.

Mr Gove did not grant Sir Hugh’s request. He said the Department for Education guidance to head teachers “does not specify what constitutes exceptional circumstances”.

He added that “head teachers are free to grant pupils leave in exceptional circumstances and it is for them to decide whether to grant time off.”

And that many schools are taking advantage of flexible term times to help parents cope with the problem of high holiday prices during the summer.