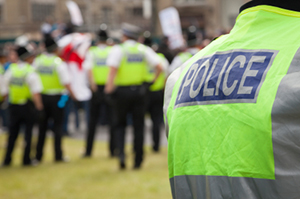 A total of 609 officers were assaulted on duty at West Yorkshire Police last year – a threefold increase on the previous year.

Of the 609 officers attached last year – these were recorded as assaults without injury.

The figures were obtained from the force under a Freedom of Information Act request.

Nick Smart, chairman of West Yorkshire Police Federation says that despite increased equipment, training and protection in recent years, policing remains a dangerous occupation: “There is no such thing as a routine job. Officers have to be mindful that every job they go to poses a risk.”

Mr Smart added: “The equipment has got better, defence training has got better, but the threat on the streets is still there as was shown by the shooting in Leeds last year and the events in Manchester. We need to ensure that when officers need assistance from their colleagues they are there and that changes to shift patterns, fewer officers on the streets and reduced budget do not impede officers’ ability to provide back up.”

Nationally – more officers are being assaulted on the streets every day. There were 20,249 assaults on police officers between April 2013 and March – an increase of 579 assaults than in the previous financial year.

A police officer in the UK is assaulted every 27 minutes, according to these figures. That is 56 officers attacked on the streets of England, Wales, Scotland and Northern Ireland every day.

Steve Evans, vice-chairman of the Police Federation of England and Wales, blamed falling officer numbers for the increase in police assaults.

Mr Evans said: “Clearly the number of police officers on the streets have gone down and people know that. If visible presence has gone down – does that make people feel more confident to have a go at a police officer?”

The Police Federation of England and Wales has said it would like to see custodial sentencing tightened up so that any offender who commits a second tier assault on a police officer can expect to spend time in jail.

Mr Evans added: “There needs to be a greater deterrent…I have heard judges and magistrates say ‘You are police officers, you should be used to it’. But it should not be seen as an occupational hazard. That is unacceptable.”