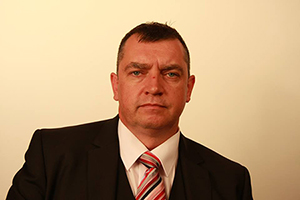 The Ministry of Defence Police has been stripped so much it is in danger of no longer functioning, the force’s federation has warned.

The once 3,500-strong force has shrunk to 2,600 – meaning it has lost around a third of the workforce over the past five years, the Minister for Defence Personnel, Welfare and Veterans, Anna Soubry heard.

Eamon Keating, chairman of the Defence Police Federation, (pictured) said another 200 officers are urgently needed to be recruited if the force is to function.

He was speaking at the federation’s annual meeting in Glasgow last month.

He said: “Minister, I must state, quite frankly, that the MDP is now urgently in need of at least 200 officers if we are to deliver what the MOD requires of us without expecting our existing officers to never be ill, injured, in training or on leave.