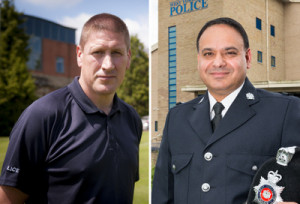 Two West Yorkshire Police officers have been honoured in the Queen’s Birthday List.

PC Bob Bowman (pictured left) in Leeds and PC Yasvender Rehill (right) in Bradford have both been commended for their excellent work in their respective communities.

PC Bowman is the Youth Crime Reduction Officer for the Safer Leeds partnership and receives the Queen’s Police Medal.

He was instrumental in setting up the Safer Schools programme in Leeds in 2009 which is a shining example of partnership work in the community. He has also worked within the restorative approach to crime and incidents bringing together victims of crime and offenders to challenge offender behaviour and has been at the forefront of tackling knife crime in Leeds.

He said: “All my work has been about working in partnership. It can be hard as there are so many different agencies with different agendas but when you get it right it is the way forward.

“It has been great to see what effect safer schools has had because everybody is working together. This is an honour but I have just been doing my job. I have done the best I could, to be fair and embrace other people’s opinions and the Force and my family have been really supportive.”

PC Rehill is a Community Prevent Engagement Officer and receives the British Empire Medal for services to policing and community engagement in Bradford.

He said: “I had no idea at all that I was going to get this honour. It was a big surprise and I am very proud. I aim to be a role model within the community and I hope this will promote our work and encourage more people to join the force.”