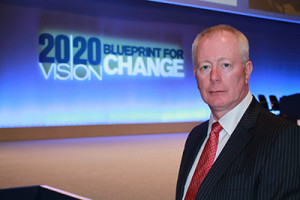 Ian Rennie has retired as the general secretary of the Police Federation of England and Wales – but what sort of Federation is he leaving behind?

Will staving off compulsory severance – for now – be remembered as his greatest achievement as the lead negotiator of the Police Negotiating Board.

See part two of our interview below.

You have taken much criticism across the country for the results achieved. Has that been fair?

Officers wanted no change so those affected are likely to be critical. I had the same experience in 2008 with the three year pay deal, which I was criticised for by many before it was later recognised as being a great deal. I don’t think what has been achieved with police pensions will be recognised for many years. Police pensions of the future will continue to be more favourable than those of other public sector workers, the majority of whom will not receive their pension entitlement until state retirement age. The problem for me throughout the process was not being able to keep officers personally informed as, unlike other unions and representative organisations, the Federation does not have a membership database. Hopefully this failing will be addressed as a result of the Independent [Normington] Review [into the Police Federation], which included this within its recommendations.

How would you respond to accusations made in a Home Affairs Select Committee report of bullying?

The Home Affairs Select Committee has parliamentary privilege and any evidence they see or hear can be published. The evidence does not have to be tested or other views sought. I am disappointed that they did not take up our offer to visit [the Police Federation] headquarters building where they could have spoken to the management team and staff. So I believe that the report lacks balance and sensationalises some issues; particularly in respect of the publication of one side of a supposedly confidential grievance alleging bullying from nearly 10 years ago which had been dealt with at the time, and the reference to bullying from an ex-employee whose dismissal was a confidential employment related matter.

One of your big results as general secretary was staving off compulsory severance – for now. How pleased were you at that decision?

The Police Arbitration Tribunal (PAT) had originally said that they saw no reason why police officers should not be subject to compulsory severance. So to turn that round and succeed with our arguments that compulsory severance was not appropriate was really satisfying. Our evidence on the psychological contract between Forces and officers and the impact on an individual’s pension was very powerful and made a very convincing argument. I am delighted that the PAT agreed with us and that the Home Secretary ratified the decision.

What sort of Police Federation are you leaving behind?

A Federation with a unique opportunity. It has been a significant challenge to drive the organisation through this reform process and to get the Independent Review recommendations to our conference. No change is not an option for the Federation and whilst I believe that there is a huge appetite for change in the country we have still to overcome certain vested interests within the organisation. If there is one change that needs to happen for the organisation to survive and move forward it is the removal of the rank committee structure nationally and that governance of the national body becomes the responsibility of Joint Branch Boards through their elected Chairs and Secretaries. I am really pleased that conference supported bringing about this change, which hopefully will enable the Federation to evolve and reclaim its rightful place as the credible and respected voice of policing, representing the welfare of its members and efficiency of the police service for the benefit of the public whom I have been proud to serve for the last 33 years. I believe that conference has provided Steve White, the newly elected chair and my Federation colleagues with a fantastic opportunity and I wish them well for the future.

What are your plans for the future?

Getting some normality back into my life and my golf handicap back down to single figures.

What will be your best memory of policing?

There are so many it is difficult to identify individual memories but one that I will never forget is the look of pride on my mum’s face when she saw me in uniform for the very first time. It has been a fantastic career that has provided me with a huge variety of opportunities both professionally and personally. The job has not been easy at times but it has been a great privilege to have been general secretary of the Police Federation during these unprecedented times.