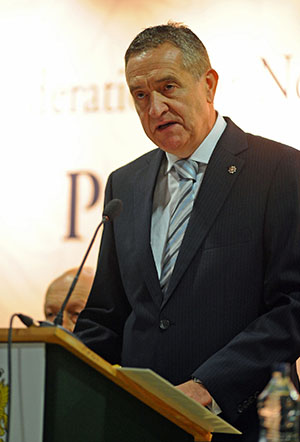 Mutual aid policing to Northern Ireland is a “sticking plaster” used to cover “very obvious gaps in resources” – especially as many officers that came to help are not routinely armed.

Officers from the Police Service and Northern Ireland have thanked their English, Welsh and Scottish counterparts for their help in mutual aid operations over the past year.

But Terry Spence, chairman of the Police Federation for Northern Ireland, (pictured) talking at the organisation’s annual conference on Wednesday, said a better solution would be to have more officers in the PSNI.

He said: “We needed thousands of mutual aid officers to assist during the G8 Summit and to support us during widespread disorder in July. I want to thank colleagues from forces in England, Scotland and Wales, for agreeing to take on, this onerous and dangerous responsibility.”

The conference also heard that a “shocking” quarter of officers from the PSNI’s frontline have been hurt or injured.

Mr Spence said: “820 officers have been injured on duty as a result of the flag protests and violence orchestrated by the Ulster Volunteer Force and the Ulster Defence Association. That is a shocking statistic. Almost a quarter of all frontline officers injured.

“They sustained wave after wave, of brutal attacks by marauding riotous thugs using ceremonial swords and pikes, bricks, bottles, blast bombs, nail bombs, petrol bombs and, on occasions, gunfire. Scores of our members have been hospitalised with broken bones, lacerations and concussion. Not to mention those also suffering the effects of Post Traumatic Stress Disorder.”

The force has been “haemorrhaging” officers in recent years, Mr Spence added, with hundreds of officers facing burnout as a result.

“A heavy burden, is being placed on officers, because the police service is so under-strength. They’re having to cope with 12-hour shifts, cancelled rest days and chaos when it comes to their annual leave entitlement. They are fatigued, overworked and stressed which is, in turn, causing burnout.”

Mr Spence also warned of the dangers of Second Impact Syndrome – whereby the brain swells after a person suffers a second concussion before the symptoms of an earlier one have subsided.

The Police Federation for Northern Ireland has lodged a formal complaint with the Health and Safety Executive – alleging its force’s command failed to take adequate steps to lessen the likelihood of serious injury to officers during serious disorder.