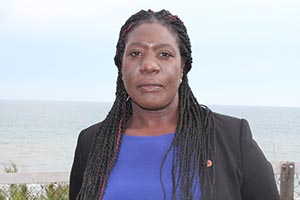 Black and ethnic minority officers feel they are being denied promotion and are being kept in front line posts to make the police service look diverse, it has been claimed.

Franstine Jones, President of the National Black Police Association, (pictured) made the claim speaking at the Police Federation of England and Wales conference this week.

Mrs Jones said: “There is a perception among some officers from black and minority ethnic backgrounds that they are being kept on the frontline so that the service can be seen as diverse.”

Mrs Jones, a diversity officer at Suffolk Constabulary, warned that police leaders need to deal with the problem.

She said: “If you were looking from the outside in, as a new applicant, and you looked at where BME officers are, they are predominantly lower ranks. If you are not in the senior ranks you have no power to influence change. You have no power to help the organisation understand its diverse communities that it polices.”

The number of black and minority ethnic officers fell by 2 per cent last financial year compared with the year before and there were only ten BME chief superintendents in England and Wales at the last count.

Mrs Jones, who said her force had been hugely supportive to her role with the NBPA, said: “In the next five years, if we are not careful we are not going to have any BME officers above the ranks of chief inspector because it takes more than 30 years to get to the senior ranks and by that time they are due to retire.

“Why is there a reluctance to promote BME officers and staff within the police service? Are you telling me that in 30 years we do not have anyone from a BME background who is good enough to be in the ACPO ranks? We have more BME graduates joining than their white counterparts so you cannot tell me that none of them have got the right qualities, qualifications and experience to become chief officers.”

Mrs Jones added: “If the service does not allow people up to the higher ranks, that is to the service’s detriment because it is not going to change. The leadership has to recognise this.”