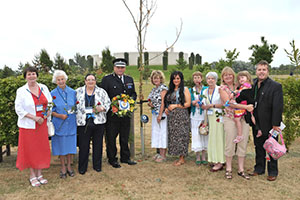 Chief officers from all UK forces have been asked to help secure the long term future of Care of Police Survivors by making an annual donation.

Chris Sims, chief constable of West Midlands Police, (pictured in uniform) has written to all his ACPO colleagues asking if their forces will commit to giving the charity £2,000 every year – in place of any voluntary donations.

Mr Sims said is “to secure COPS’ long term sustainability by changing its relationship with the police service to allow it to be treated as a service provider rather than simply a charitable organisation.”

So far 29 forces have responded positively to the chief’s letter.

In the correspondence to colleagues, Mr Sims said: “COPS requires a level of planned income each year to function effectively.”

Services Care of Police Survivors offers forces and the families of the fallen include contact with new survivors through an agreed protocol, a monthly survivors letter, three annual newsletters a year to wider stakeholders and an Annual Report.

It also provides an input to Family Liaison Office training as required, the annual Survivors Weekend in July – including a subsidy for survivors – and specific events for siblings, spouses, parents and children

There is also in place a process to manage the transition from intensive force support to lifetime support from COPS.

Mr Sims added: “If forces, and associated organisations, were able to make a small annual payment against this service delivery statement, the future of COPS would be assured and its own fundraising activity could focus on the provision of additional services, such as counselling or bespoke support.

“If you were able to support this plan the annual cost to your organisation would be £2,000 per year which could be reviewed in 3 years’ time.  This sum would replace the voluntary donation given by some Forces.

“I know that COPS Trustees would want to emphasise that support for your survivors is in no way conditional on your ability to sign up to these new arrangements.”

Mr Sims, who is a trustee of COPS, joined the Police Service in 1980 and was appointed Chief Constable of West Midlands Police in 2008.  He has been an ardent support of the COPS Charity and became a Trustee in 2009.

He added: “For my part, putting aside the strong emotional reasons to support COPS, the business case for its provision of long term contact and care, which Forces have always struggled to achieve, is overwhelming.

“Could I ask you to give this your personal consideration.”

Individual officers wanting to support the Care of Police Survivors can do so by donating 30p a month from their salary to the charity. Officers in 12 forces are currently doing this. If you are interested in this option, please contact Georgine.whigham@ukcops.org