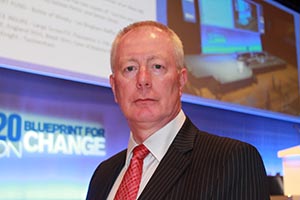 How will Ian Rennie – the retiring general secretary of the Police Federation of England and Wales – be remembered?

Will Mr Rennie, be remembered as a man who “sold officers down the river” when it comes to their pay and pensions? Or will he be remembered as the man who secured a favourable three year pay deal for the country’s cops in 2008 and most recently fought off the Government when it came to the power to make police officers redundant?

You have led negotiations for the Staff Side of the Police Negotiating Board as police pay and pensions have been drastically changed since 2011 – any regrets?

After I had brokered the 3 year pay deal in 2008 [officers received a 2.65% increase from September 2008, with another 2.6% in 2009 and 2.55% in 2010] it gave us some time to work with the Official Side to establish a strategy to deal with the future pay arrangements for police officers. Unfortunately the Official Side are not a “side” in the same sense as the Staff Side – they had a disparate group of organisations that included the Association of Police Authorities, ACPO and the Home Office, all with different agendas, brought together under the umbrella of the Local Government Association who provide a chief negotiator. Despite three years of trying we were unable to get an indication of what direction the Official Side wanted to take in their often repeated desire to “modernise” police pay. Into this gap the government parachuted Tom Winsor who made over 180 recommendations many of which impacted on police pay and conditions of service. In many ways you could say that Winsor was imposed on the Official Side as much as it was imposed on the Staff Side. There were things in Winsor that I think Forces have regretted – like the shift allowance that has cost a significant amount of money; the fitness tests that will be hugely expensive to implement with no obvious benefit, and direct entry that will completely change the nature of the service from within. I would have preferred to see change that had been developed by people who were in and of the police service. I regret the passing of the PNB [being replaced by a Pay Review Body this year] because I think that police officers should have a negotiating forum in which to raise matters about their terms and conditions. However, we have managed to agree to set up a Police Consultative Forum that will sit underneath the Pay Review Body to deal with matters that are not just about pay.

Post Winsor, did you get the best deal for police officers that you could have?

I believe that we managed to get a better deal than was originally proposed by Winsor. For example; we retained time and a third for casual overtime even though Winsor proposed it should be paid at plain time; this would have meant that officers could have been retained on duty with no financial detriment to the Force. We ensured that on-call remains voluntary and is paid on every occasion rather than after 12 occasions as Winsor proposed; this would have meant that every officer could have been required to be on call with no cost to forces. Although there were changes to the Hertfordshire agreement, we convinced the Police Arbitration Tribunal that officers should get the £50 overnight allowance whilst on mutual aid as well as being paid for every hour they worked; this has meant that some officers have actually been paid more than under the Hertfordshire agreement. We made sure that the pay freeze did not apply to young in service officers and that leapfrogging that would have resulted in officers with less service reaching the top of scale before an officer with more service has not subsequently occurred.

As well as managing to mitigate many of the Winsor Review recommendations, I am especially proud to have instigated the PNB Gender Equality Work Life Balance working group that took, into a separate negotiating working group, issues that were particularly relevant to women. The working group has been responsible for simplifying Regulations on part time working; issuing guidance on managing maternity and flexible working; making sure that part time officers, including Inspectors are paid appropriately for the hours that they work and when acting up or on temporary promotion. It also commissioned the Equal Pay Audits to inform pay negotiations. This has made it easier for all officers, but especially women officers, to better balance their work and their family lives.

What is your view on what Winsor did to police pay and conditions overall?

Winsor was asked to reduce the police pay bill and that is what his proposals were designed to do. The reality is that this has caused real hardship in many police homes and families. Many officers feel undervalued and disillusioned and are choosing to leave the service because there is scant recognition of the demands they face and good work that they do.   And there are more changes on the horizon that will further impact on pay and conditions – new recruitment arrangements, in-service fitness tests, the x-factor and restricted duties that could see some officers annual pay being reduced by almost £3,000, changes to the promotion system and direct entry are all expected to come in over the next year or so. Whilst the final form of all these things has not yet been decided we have managed to reduce the negative impacts as far as possible, but the Federation cannot take its eye off these particular balls.

Officers with 10 years’ service remaining – as of April 1 2012 – won’t have any changes to their pensions. Many other officers have used the phrase “sold down the river” when it comes to the negotiation. What would your response be?

I can understand why many of my colleagues feel angry and let down. They joined the police service with an expectation that they would retire with that pension entitlement and now this has been taken from them. The change to police pensions was part of this government’s agenda to reform public service pensions. It was made very clear to us that there would be no exceptions and that this included the police service. Therefore as pensions are non-negotiable and with no right to arbitration we engaged in the consultation process in an attempt to get the best deal we could for as many as we could. The alternative would have been to wait for the Home Secretary to impose the government’s reference scheme, which was nowhere near as favourable as the pension scheme we have managed to secure.

Do you think people were under a false apprehension that their pensions could not be changed?

I think many officers believed that the police pension regulations afforded protection from this detrimental change but the government is elected to make and change the law and that is what they did.

In part 2: Criticism, compulsory severance and the Police Federation in the future.