Chief speaks out in praise of Federation 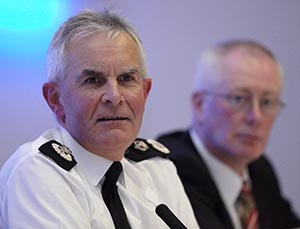 The chief constable of Greater Manchester Police (GMP) has come out in defence of the Police Federation following the Home Secretary’s critical speech at the organisation’s annual conference.

Sir Peter Fahy (pictured) has personally thanked Police Federation representatives for the work they do, adding: “I am very grateful for the personal support you give to officers under investigation or who are sick. I know you do this on top of your normal challenging workload as operational cops.”

In an open letter to Greater Manchester Police Federation, Sir Peter wrote: “The national debate [on Federation reform] should not hide the very positive work that officials and representatives carry out day-to-day in GMP.

“Over the past year, working with the Federation, we have been able to make important changes to the way the force deals with discipline cases to produce more common sense and speedier outcomes and to the cases of officers who are on long-term sick or injured on duty.

“We have negotiated through a whole series of changes to working practises and structures to enable the force to cope with the budget reductions. In all this the Federation has kept a clear focus on the service and protection of the public.”

Sir Peter was speaking after the Home Secretary publicly lambasted Federation representatives at their annual conference in Bournemouth.

Mrs May reeled off a list of alleged police failings, including Hillsborough, the misuse of stop and search and allegations of victimisation within the Federation.

However, Sir Peter said: “There has clearly been considerable press coverage and public debate about reform of the Police Federation and the Home Secretary’s speech.

“What is clear is that the Federation itself recognised the need to change and commissioned the independent review. Conference then accepted all the recommendations but it is also clear that the GMP delegation played a crucial role in gaining agreement for more radical reform and greater transparency.”

He added in his open letter: “I would like to express my support and appreciation for the work of the Federation and the positive role it plays, not reflected in the media stories.”

Ian Hanson, Chairman of Greater Manchester Police Federation said: “I am very grateful that Sir Peter has stepped forward in support of us in setting the record straight as to the reality of what local Federation work looks like and it remains to be seen now if any of his colleagues around the country feel able to step forward and show the same degree of leadership and decency.”

Mr Hanson has written to Mrs May, calling on her to reflect upon her remarks and apologise for the “grossly unfair” attack.

He told the Home Secretary: “Local Federations are a force for immense good and contribute greatly to our collective policing efforts…Speaking to the assembled group of what were overwhelmingly local volunteers in the manner that you did is about as fair as somebody on a constituency doorstep attacking a local party volunteer over the behaviour of a few people at Westminster.

“In both cases the volunteers will have probably done a day’s work before going out to help out in a cause they passionately believe in.”