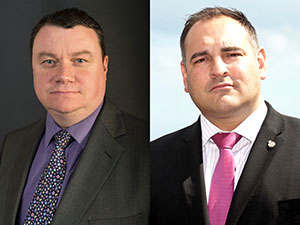 A constable and an inspector have declared their intentions to battle it out to be the next chairman of the Police Federation of England and Wales.

Will Riches, the Chairman of the Constables Central Committee, (pictured right) and Steve White, current Vice-Chairman of the staff association and an inspector, (left) are both looking to replace the retiring Steve Williams.

Mr Williams will be leaving the Police Service after the Fed’s annual conference in May. Announcing his decision to members he said that “the timing was right for a new chair to take over the running of the organisation”.

In the future, If measures in the independent Fed review get pushed through, every federated officer across the country will get a vote for the new national chairman.

However, under the current state-of-play, only the 30 members of the Police Federation’s Joint Central Committee (JCC) will decide who gets the role.

They will vote on May 23 – the Friday of the annual Federation conference in Bournemouth.

Mr Riches joined the Metropolitan Police in 1995 and served on the London boroughs of Redbridge and Hackney working in response, investigation, public order and neighbourhood policing. He became a Fed rep in 2001 and joined the JCC in 2009.

In a message to colleagues – dubbed a manifesto – he has vowed to “drive change forward” when it comes to Police Federation reform.

He said: “These are exciting times. Working together, we will deliver a renewed and inclusive Police Federation. My vision is of an organisation that listens and learns; an organisation that communicates effectively with all of our members, opinion formers, policy makers and the many communities we belong to and are privileged to serve.

“I will lead by example to deliver the greater transparency and accountability that is rightly expected.”

Mr White joined Avon and Somerset Constabulary in September 1988. He was promoted to sergeant in 2001 – a time when he also became a Fed representative, before later going on to be promoted to inspector.

At the Police Federation annual conference in May 2011, Mr White was elected to the Inspectors’ Central Committee – he was then elected to the position of national vice-chairman in November 2012.

In his spare time he is a private pilot and treasurer of a local flying group who jointly owns and flies an aircraft based at Gloucester airport. According to the Police Federation website he “also enjoys riding his motorbike, both in the UK and Europe given half the chance”.

In his message to the electorate, Mr White states: “We have an unprecedented opportunity to re-focus and re-direct what we do, and how we do it. More than ever the Police Federation has an opportunity to be the true voice of British Policing.

“As chairman, I would drive this agenda relentlessly, embracing the opportunity that our review has given us and that the vast majority of our members want. The decisions we make at conference must show that we as a Federation have listened to our members.”

The job of general secretary of the Police Federation of England and Wales will also soon be vacant after Ian Rennie announced he too would be retiring from that role after the conference in May.

As things stand Andy Fittes, a Met officer from the Sergeants’ Central Committee, is the only person to announce being in the running for the role.

Under current Federation structures, all representatives of the JCC have until the week of the conference to announce their intentions to stand for national positions before a vote, if required, takes place at the end of the week.