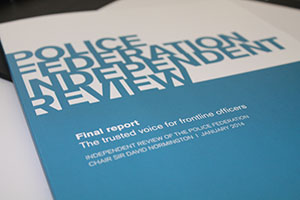 All recommendations set out for the reform of the Police Federation will go to conference.

Federation representatives from across the country will have the opportunity to vote on all recommendations made in the independent review – which will map out the future blueprint of the organisation.

The conference runs between Tuesday May 20 and Thursday May 22.

Officials have been locked in discussions over the best way to pave the way for the future of the organisation and at a meeting held today decided all 36 recommendations should be debated democratically at their annual conference next month in Bournemouth.

“We know change is needed and see our conference as the opportunity to realise this change but also want to make sure we take account of all those involved in the process. After intense debate and discussions in a number of meetings with representatives we have now agreed all 36 recommendations will go to our conference next month to be voted on.”

His comments come after suggestions that representatives could vote on either one single motion or on ‘groups’ of motions but it was felt by the majority that they could only be properly democratically debated if they appeared individually – as they do in the Independent Review of the Police Federation.