Steve Williams: Why I decided to retire from PFEW 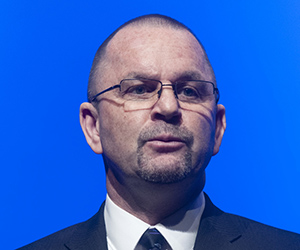 Why is the chairman of the Police Federation of England and Wales retiring? Is he leaving a “sinking ship”? What next for the national staff association and the Fed review?

Following his resignation, WYPF Ezine spoke to Steve Williams (pictured) about his decision to leave the organisation following annual conference in May.

See the first part of the interview below.

Why are you retiring from the police service?

I have been thinking long and hard about retirement. I had my 30 years full service on 3rd January. I have enjoyed my career immensely. I have a very young family – it is a huge commitment. People will say “well you should have thought of that before you took the job on” but I am away from home six days a week and I am missing my family. Whilst I enjoyed my chairmanship and the independent review, I thought the time had come to take it to conference and push it as far as I can with the support of colleagues up and down the country and for a new chairperson to pick up the mantle from where I have left off.

You mention the review you instigated – why are you not seeing it through to the very end?

I think the time is right for me now to retire. It has been difficult. I make no bones about that. It has been tough along the way and it does have an effect on you as an individual. It has had an effect on me and my family. And I am still pleased and proud of having instigated the independent review. I think it is the right thing to do for the organisation to change. Everyone accepts that now. And I wish my successor all the best at Joint Central Committee and branch board level to help drive the change across the organisation that desperately needs to happen.

Are the changes going to happen now that you’re going?

I think it will happen. I think they would have happened had I stayed. But I think [announcing retirement] has assisted almost as a catalyst really in my opinion. The fact that I have announced my retirement from the service and a lot of people have stood up and said “what’s that about” and I do think now there is an absolute willingness around the country to make sure that the changes are implemented. I just think its onwards and upwards now for the organisation. We’ve had an awful lot of negative media and I would like to think the watershed moment was the Dispatches programme [on Channel 4]. It wasn’t very pleasant hearing, it was quite critical. And I do think now we need to put all the negative stuff behind us. We are an organisation on the move. We are an organisation that is changing and will change and I think it is going to change for the better.

Some officers have said that you are leaving a sinking ship. Is that fair?

No. Far from it. The Federation is on the up now. The recognition is there that we need to embrace the independent review. There are some things that are going to be difficult to implement. There are some things that might not be implemented. But we need to be very positive about the independent review, and the changes and the membership – everywhere they have looked for evidence, they have found that we do need to change and there is that holistic acceptance. I do genuinely believe and I have been inundated with emails, texts messages, calls and there is a real drive…

Are some people blocking change? And if so, why?

Some people have been resistant to change from the very first announcement that we were going to conduct an independent review of the organisation. And people are entitled to their opinion. We are a huge organisation, representing in excess of 124,000 police officers and we have such a huge representation, it is clear we are not going to win everyone over. People do have different opinions, we are a democratic organisation and that is absolutely right and fine. But the majority of people involved in the Federation want to now see this change happen.

In part 2, Steve Williams on accusations of bullying and his hopes for the upcoming PFEW conference.