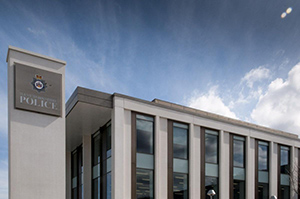 Lockable boxes outside each cell for suspect’s smelly shoes are just one of the features in West Yorkshire Police’s new state of the art Leeds district headquarters.

Officers and staff have begun moving in to the new purpose-built building at Elland Road – opposite Leeds United’s football ground – which will eventually be home to more than 1,100 officers and staff.

This will make the single division bigger than some police forces in England and Wales, such as Warwickshire Police and the City of London Police.

The building – which has cost £34 million – will house detectives from CID, neighbourhood police, the district command centre and officers responding to 999 calls.

A new custody suite in the building contains 40 cells which feature the innovative smelly shoe boxes and in addition specially-made ducts to extract the odour.

The move to the new giant headquarters building follows a change in late 2013 from three Leeds divisions to one single district as part of West Yorkshire Police’s new operating model, which has seen eight divisions replaced by five districts, county wide.

“There is also scope for partner agencies to work from the new facility.”

West Yorkshire Police and Crime Commissioner Mark Burns-Williamson said: “The opening of the purpose built headquarters for Leeds is another big step in the direction of closer integrated working with partners and ensuring that modern and efficient facilities will help to lower our overall costs by replacing out of date buildings.”

A phased movement of teams in to the new facility is being carried out over the next few weeks. The building is due be fully operational by Wednesday April 30.

The Leeds district headquarters is one of three Private Finance Initiative (PFI) projects providing new facilities for policing teams in West Yorkshire. Teams moved in to the new Wakefield district headquarters in November and officer and staff training is now up and running at the specialist operational training centre at Carr Gate near Wakefield.

Under the PFI model, contractors Interserve will provide facilities management services, including cleaning, repairs and ground maintenance for the next 25 years.