Berry happy in new role at Care of Police Survivors 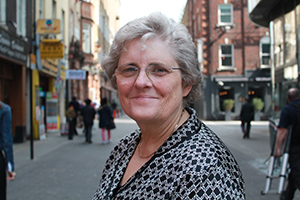 Police officers must never forget the families of colleagues who have lost their lives on the line of duty, the new chair of the Care of Police Survivors (COPS) charity has said.

Jan Berry said the busy nature of policing meant that as time wears on, families of the fallen can be overlooked by the service. And she urged serving officers to remember the surviving relatives of their colleagues killed or murdered on the job.

COPS was set up to help the families of fallen police officers rebuild their lives and to ensure that they remain part of the police family.

Mrs Berry said: “It doesn’t take a lot for someone just to have a cup of tea with a survivor or send a birthday card or a Christmas card or maybe a card on the anniversary of somebody dying, and it just shows to them that they haven’t been forgotten, that other people care.

“Even my time at the Federation, I became friends with a lot of survivors. And I realised how important COPS was in their lives because it provided them with a place to go and people to speak to who understood what they were going through. And I think sometimes the police service doesn’t – because they move on. Policing is still being delivered. But survivors don’t move on.”

COPS helps in practical ways, by for instance providing children with driving lessons in lieu of a lost parent for example. And every year COPS holds a memorial service at the National Arboretum in Staffordshire – this year on July 19 and 20 – and it also organises weekends away to give survivors a break and allow them to socialise with others in the same position. It is this “emotional support” that is key, Mrs Berry said.

Mrs Berry was a police officer for 37 years, and spent the last six of those leading the Police Federation, before retiring in 2008. She went on to work with the Home Office on reducing police bureaucracy.

She added: “We should never lose sight of the fact that we do lose colleagues. And there but for the grace of God goes many of us. It is important to support those who are left behind. There is a number of people I know or knew where their families are in that position so from the big police family it is important not to forget the contribution of those that we have lost, and their families and friends are a big, important part of that.

“I think COPS provides that level of support and practical aid that the service can never provide.”