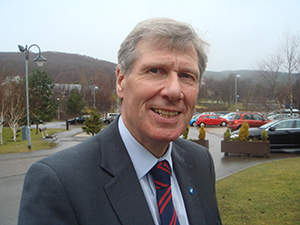 Attacks on the terms and conditions of police officers by “Tom Winsor, Home Secretary Theresa May or by anybody else are entirely unacceptable,” a senior politician has said.

Scottish Justice Secretary Kenny MacAskill (pictured) told the Scottish National Party spring conference that the country’s police officers “who put their necks on the line” deserve to have their pay and conditions protected.

The Scottish Police Federation has calculated that with changes to officer pay and conditions as a result of the Winsor reviews, Scottish officers will earn between £19,000 and £21,730 more overall in the first decade of service than their English and Welsh colleagues.

Over a career, the Federation states, Scottish officers could earn £250,000 more than officers south of the border.

A fringe meeting at the conference at the Aberdeen Exhibition and Conference Centre heard from the Federation that “police officers in England and Wales are not valued and regarded” by politicians in the same way as their Scottish counterparts.

Mr MacAskill said: “We believe police in our communities are important. We believe that the resources of our national service are vital for our communities and equally we believe an attack on the terms and conditions of those who serve by Tom Winsor by Theresa May or by anybody else is entirely unacceptable.”

At the same fringe meeting, Calum Steele, General Secretary of the Scottish Police Federation, told delegates what he sees as the differences between how politicians view policing in England and Wales and Scotland.

Mr Steele said: “Can you imagine what it is like to be a police officer in England and Wales turning up and doing the same job that we are doing on a day-to-day basis – attending domestic incidents, attending people trapped in their cars at road accidents, attending all kinds of violence on the streets. They are dealing with all these same things but they are not valued and regarded in the same way.”

Police officers in Scotland have not had their pay changed or frozen as a result of the Winsor reviews – reviews which Justice Secretary Mr MacAskill has previously described as “insulting”.

But their pensions are being altered in line with officers south of the border from 2015 and, like English and Welsh officers, they received a 1 per cent pay rise last year.

In a statement, the Federation said it had used the spring party conference season in Scotland to “reinforce” to politicians the “message of the demoralising effects of near stagnation on wages and pension changes”.