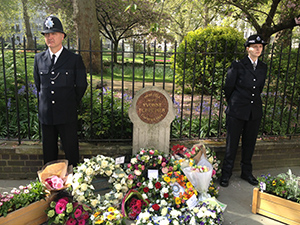 A two minute silence was held to remember police officer Yvonne Fletcher, on the 30th anniversary of her murder.

Metropolitan Police commissioner, Sir Bernard Hogan-Howe, said the force are “determined to catch the person responsible” for the murder.

The officer, who was just 25 when she died, was gunned down on 17 April 1984 outside the Libyan embassy.

No-one has been prosecuted for her death.

Members of her family joined friends and colleagues in remembering her on 17 April. Floral tributes were left at her memorial in London (pictured).

Sir Bernard said: “At the end of the day, Yvonne Fletcher’s parents lost their daughter.

“Her sister lost a sister. We lost a colleague, and we’re determined to make sure we catch the person responsible.”

PC Fletcher was one of 50 officers policing a protest against Col Muammar Gaddafi’s regime outside the embassy when she was hit by a burst of gunfire from a first-floor window.

Investigators believe the bullets, which killed her and injured 10 protesters, was fired by a sniper who intended to hit protesting Libyan dissidents.

In 2012 the Met sent a team of officers to Libya to continue their investigations into the murder.

PC Fletcher’s friend and colleague, John Murray, told the officer in the ambulance that he would get justice for her.

“Bearing in mind that those were the last words she heard before she died, that’s a promise I made to her and a promise I’ll keep,” he said.

Picture courtesy of John Tully, chairman of the Met Police Federation. He described the service as “very moving.”