Theresa May keen to leave Fed reform to the Fed 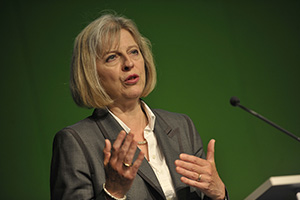 The Home Secretary has indicated she is happy to leave reform of the Federation to the Federation – despite MPs on the Home Affairs Select Committee wanting her to get involved.

Theresa May (pictured) resisted prompting from MPs on the committee at a hearing today to use ministerial powers to reform the federation.

She said that Steve Williams – who announced yesterday he is retiring from the Police Federation of England and Wales – had done “a very good job”.

And she said that the national organisation now needs a new chairman to take things forward.

“I would like the Normington review recommendations implemented in full…”, Mrs May told MPs.

The reforms are currently being debated with recommendation to be taken to the annual Police Federation of England and Wales conference.

Mrs May said she had had a conversation with Mr Williams today but that was private. However in response to questioning from Keith Vaz MP, she said she did not ask him to stay on.

Sir David Normington – who oversaw the Federation review published in January – said he was “disappointed” by Mr Williams’s resignation.

But he too encouraged the Federation to reform itself.

“It is much better for an organisation like this to change from inside…” stated Sir David.

And he added that the Police Federation of England and Wales annual conference – coming up at the end of May – was a perfect opportunity for the Federation to reform.

“Conference is a chance for the branches and members who want change to demand it,” concluded Sir David.

Martyn Mordecai, treasurer of the Police Federation, also described conference as a “golden opportunity” to reform.

Independent Review and its recommendations and, through thorough discussion about the practicalities, form a clear, unified vision of the direction the Federation will move in.

“We will endeavour to engage and engender debate around the recommendations of the review as the decisions we make will provide a blueprint for considered, lasting change and guide the Federation into the future.”