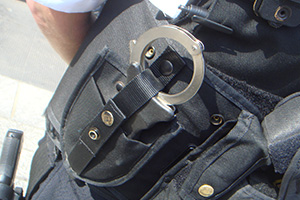 The number of arrests made, crimes committed and searches carried out by police officers in England and Wales have all fallen, according to the latest figures published by the Home Office.

And the number of recorded crimes has decreased by 7 per cent over the same period.

Decreases in the number of arrests were seen across all nine offence groups. Violence against the person saw the biggest reduction, at 10 per cent. There have been year-on-year decreases for theft and handling of stolen goods, which have fallen from a peak of 419,900 in the year ending

The number of arrests for both sexual offences and drug offences decreased for the second consecutive year, having increased for the previous 3 and 6 years respectively.

All but one of the 43 police forces recorded decreases in the number of arrests. Dyfed-Powys recorded 11,770 arrests, up slightly from the 11,756 in the previous year. The largest percentage decreases were at City of London Police, down 38 per cent, and Derbyshire, down 33 per cent.

The number of stops has also decreased with PACE searches down to 1 million in 2012/13 – a decrease of by 12 per cent on the previous year. Around half of these were related to suspected drug use. And the number of fixed penalty notices issued also fell by 9 per cent.

The statistics, Police Powers and Procedures, England and Wales 2012/13, were released by the Home Office on Thursday (April 3).

The number of people arrested has fallen for the sixth successive year and is at the lowest number since the arrests data collection began in the year ending March 2000.

However, the Home Office said “caution” is needed in using some of this data as “figures for earlier years included estimates for a few forces that were unable to supply arrests information to the Home Office.”