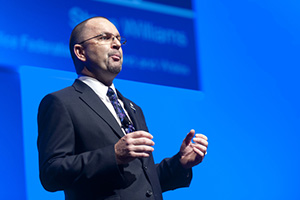 The Chairman of the Police Federation of England and Wales has announced his plans to retire from the police service at the end of May.

Announcing his decisions to members, Steve Williams (pictured) said that “the timing was right for a new Chair to take over the running of the organisation.”

General secretary Ian Rennie also announced he would be retiring.

Both men will leave the national Fed at the end of annual conference in Bournemouth in May.

Mr Williams was instrumental in commissioning the Independent Review into the Police Federation in 2012.

Commenting on his decision to retire he said: “The Police Federation has faced a turbulent period in its history and there has been much criticism of our organisation and the way certain members behaved.

“When I took up office it was quite clear that as an organisation we were not fit for purpose and that is why I, along with my JCC colleagues, commissioned an Independent Review to help us identify our weaknesses and come up with solutions of how we could do things differently.

“When the Independent Review was published in January it delivered a hard hitting report that clearly showed that we were not delivering what our members wanted, were failing in key areas and that many of our practices were outdated. But it gave the leadership of the organisation a clear mandate, with 91 per cent of the membership surveyed indicating that they wanted change.

“Over the last few months, despite at times some significant challenges and opposition along the way, I have tried to manoeuvre the organisation to a place whereby we can start to deliver what is best for the Police Federation, its members and the British police service as a whole.

“Having reflected on where we now are, I feel that it is only right and proper that PFEW elects a new Chairman to take this organisation into the next phase.

“The Federation has a vital and important role to play in policing, but I have made no secret of my fears that unless we get this right and embrace the change required others will do it to us, a view echoed recently by the Policing Minister, Damian Green.

“I have had over thirty wonderful years in policing and during that time I have had the privilege of working with some great people. It is in the interest of all those involved in policing that we build a Federation that represents the best interests of the brave men and women who police our communities, villages and towns and that we develop an organisation that we can once again say, is the voice of policing That will be the best prize of all.”

On Mr Rennie’s decision to retire, PFEW issued the following statement: “The Police Federation of England and Wales General Secretary, Ian Rennie, has announced his intention to retire at the end of the Federation’s Annual Conference in May (24th). Ian has been the chief negotiator on police pay, terms and conditions for the last six years, leading negotiations on behalf of all police officers during an incredibly turbulent period in policing history.”