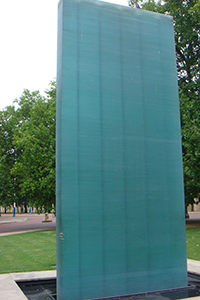 West Yorkshire Police Federation are pleased to donate £1,000 to the charity which looks after the National Police Memorial in London (pictured).

The Police Roll of Honour Trust – as well as looking after and maintaining the memorial – aims to name and honour every United Kingdom police officer who has lost their life in the line of duty since the earliest days of professional law enforcement over three centuries ago.

Craig Grandison, West Yorkshire Police Federation Treasurer, said: “We are delighted to make a donation to such an important charity on behalf of our members. We must never forget our fallen colleagues.”

The Police Roll of Honour Trust aims include “to advance the education of the public, and in particular the police, in the history of officers killed in the line of duty and officer safety by the maintenance of a comprehensive archive of information available to the public.”

The charity maintains a national archive on line of duty deaths, offers information and support to bereaved families, and provide the National Police Officers Roll of Honour and Remembrance for other memorial charities and national and local police organisations.

The Trust was founded in 2000 after 20 years research into the Roll of Honour, paying tribute to some 5,000 British police officers who have been killed or died, on duty or as a result of duty, since the first recorded death on duty of a Constable in 1680. Research now includes British losses in Colonial and other UK administered overseas police forces, believed to number 1,000 or more.

It is currently supporting the construction of a Police Memorial in Cyprus.

See more about the charity here