Brave bobbies and top cops honoured by the force 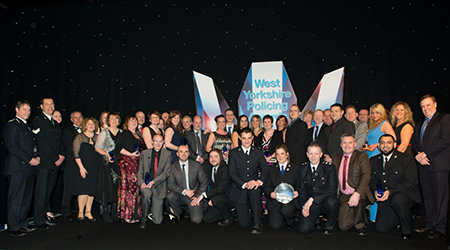 West Yorkshire Police has honoured its frontline heroes at the annual awards ceremony in Leeds this month.

Among this year’s winners were a constable who showed exceptional bravery in dealing with an attempted armed robbery and a detective who has dedicated her career to investigating cold cases.

Det Sgt Veronica Hepworth, of the Protective Services Crime, was given the Lifetime Achievement Award for her role as a leading authority in detecting unsolved rapes, while Bradford’s PC Tim Brown took home the Bravery Award after he arrested two armed men who were trying to rob a post office.

The Ian Broadhurst Trophy for Outstanding Contribution to Road Policing went to the Major Collision Enquiry Team Protective Services Operations, which the force has described as “a highly effective multi-disciplinary team responsible for bringing a number of offenders to justice following a protracted and complex investigation into a fatal traffic collision”.

PC Phillippa Child, of Wakefield, was given the diversity in action award for her work with Sue Widdowson and Jayne Bradbrook in helping vulnerable girls learn more about the dangers they might face in life.

Wakefield’s Future Stars Team took home the Colin Cramphorn Trophy for Contribution to Neighbourhood Policing for its work with young people. The Team of the Year Award went to the Confiscation Unit, Protective Services Crime, for its “truly exceptional performance” in financial investigation.

Paying tribute to the finalists, Chief Constable Mark Gilmore said: “This event is our opportunity to reward and recognise those whose single and collective contributions represent the finest traditions of policing.

“I want to pay tribute to all those officers and staff who work tirelessly, all year round, to keep our communities safer and feeling safer, never forgetting their families and friends, the unsung heroes, who support them to put their best foot forward for our magnificent policing service.”