Police minister will leave reform to Federation – for now 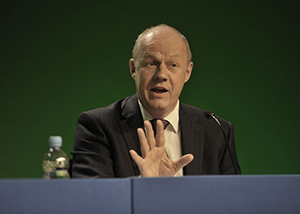 The police minister has urged the Police Federation of England and Wales to implement recommendations made in the Independent Review, but has stopped short of setting an ultimatum for reform.

Damian Green told the Home Affairs Select Committee that he had found the review “hugely illuminating and somewhat shocking” but praised the Federation leadership for instigating the review themselves.

When asked if government would look to “seize assets” from the Federation if the reforms were not made, Mr Green said that at this stage “it is sensible, given that we all agree the leadership is acting courageously so far, to allow them to continue the process”.

However, he added that it was “very important we see it is a report that does not gather dust and is an action plan”. He told the group of cross-party MPs that he wants to see progress by this year’s Police Federation Conference, which will be held in Bournemouth from 19 to 22 May.

Keith Vaz, chair of the committee, asked if government would be likely to amend the Police Act of 1919 to revise the core purpose of the Federation, one of the recommendations in the review. Mr Green said that “at the moment those decisions are there to be taken by the Federation”.

Following the committee meeting, Steve Williams, chairman of the Police Federation, said: “We realise reform needs to be made and that’s why we instigated the review ourselves.”

He added that the leadership had already been in “constructive discussions” with representatives from across the country and said he hoped to make “significant progress” by the conference.

The findings of the review, led by former Home Office permanent secretary Sir David Normington, were announced in January. He made 36 recommendations, which included abolishing the rank structure of the Federation, reducing subscriptions by 25 per cent in 2015, creating a national database of members and publishing all Federation accounts.