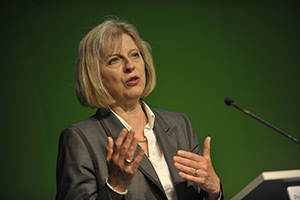 The Home Secretary wants to introduce a new offence for police corruption, strengthening what she sees as the “outdated” misconduct in public office charge.

Theresa May (pictured) announced her plans following a review of the Stephen Lawrence murder investigation, which found “reasonable grounds” to suspect one former Met officer of corruption.

In a statement to ministers, Mrs May said she wants to amend the Criminal Justice and Courts Bill to introduce a corruption offence that focuses specifically on people who hold police powers.

She said it was “untenable” to be relying on the “outdated common law offence of misconduct in public office” to deal with “serious issues of corruption in modern policing”.

The Home Secretary also announced a judicial inquiry into the work of undercover officers and the Special Demonstration Squad, a secret Metropolitan Police unit, which operated between 1968 and 2008.

Keith Bristow, director general of the National Crime Agency, has been tasked with developing an investigation to examine the alleged corruption in the Stephen Lawrence murder case, and possibly others.

“In policing, as in other areas, the problems of the past have a danger of infecting the present, and can lay traps for the future,” said Mrs May. “Policing stands damaged today. Trust and confidence in the Metropolitan Police, and policing more generally, is vital. A public inquiry, and the other work I have set out, are part of the process of repairing the damage.”

The Home Secretary cited direct entry, the new code of ethics, greater transparency and the professionalisation of the police as ways that the government is changing the culture of policing. She added that the Home Office was also “transforming” the investigation of cases involving the police through reform of the Independent Police Complaints Commission.