Officer survey – Government does not support the police 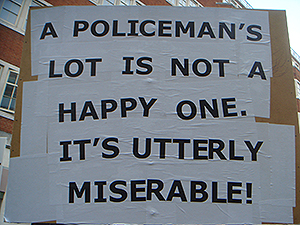 Only just over one per cent of police officers believe the Government supports the service with four out of five cops thinking current reforms “will give criminality the upper hand.”

A new survey of more than 13,500 cops in England and Wales show that only 11.9 per cent of the respondents agree or strongly agree that they would join the police today if starting afresh. Only one in ten officers reported that their morale was high.

The startling findings come in an academic report titled “Challenge and change: Police Identity, Morale and Goodwill in an Age of Austerity” by Dr James Hoggett from the University of the West of England.

As many as 13,591 police officers across 43 forces in England and Wales responded to a questionnaire into attitudes and morale amongst officers during 2013.

Neil Bowles, chairman of South Yorkshire Police Federation, said: “I think the fact that 90 per cent of current officers said they would not choose the career again is a shocking figure for the profession and someone needs to take note of it – or is it what the Government want, people to come in, go out and not stay long term.”

The response rate reflects the views of about 10 per cent of all serving police officers in England and Wales and according to the university, “the attitude and morale data provided consistent messages across the sample with only minor variations between ranks of officer or between police forces.”

Dr Hoggett said: “It is notable that the responses were consistent, despite the fact that forces vary in size and there are a wide range of policing challenges within and between forces. This lends added weight to the significance of these findings.

Other findings in the report, published on 11 February, show 84 per cent of respondents either agree or strongly agree that some police reform is needed but that 96.3 per cent are
in agreement that change should be made in collaboration with the police.

However only 1.6 per cent of respondents agree that the current government supports the police and only 1.1 per cent positively report confidence in long-term government plans for policing.

A further 80.4 per cent agree or strongly agree that the current proposals, if implemented, will give criminality the upper hand.

Dr Hoggett concluded: “Overall these findings support a view that it is crucial to engage rank and file officers about proposed changes to the police.

“In addition, taking into account the sense of identity police officers have, and the goodwill they bring to their role, it is vital that any changes that are made don’t damage identity and goodwill and do not threaten the relationship the police have with the wider community.”