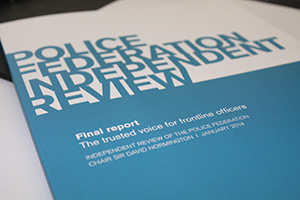 The rank structure of the Police Federation of England and Wales should be abolished as should the National Joint Central Committee, a review has stated.

The independent review into the organisation also recommended that member subscriptions should be reduced by 25% in 2015 – and possibly beyond that. A national database of the membership should be established, it said and all members will vote on the local and national chairmen.

In total, the report proposes 36 recommendations for change. They will now be discussed at local and national level – and it is expected that they will be voted on at the annual Police Federation of England and Wales conference in May.

The review report, published on January 20, raised concerns about the Federation losing both the confidence of its members and its influence over other bodies because its culture, behaviour and structure are not fit for purpose.

It said the staff association’s main problems were a lack of transparency about its decision-making and finances, a lack of accountability to its members, an “inability to promote good behaviour and professional standards” and internal divisions that have damaged its reputation.
Steve Williams, chairman of the Police Federation of England and Wales, said: “The report makes uncomfortable reading and identifies that deep cultural change is needed. It shows that the organisation is currently failing to perform its role effectively and efficiently is ineffective and uninfluential, has lost the confidence of its members, and is in need of urgent reform.

“Its recommendations are far reaching and set out a roadmap of reform. There is no doubt that root and branch change is required. The Federation needs to embrace this challenge however difficult that may be. Its findings will be seen by some as controversial and that they undermine the fabric of our organisation. However, I have no doubt that if the Federation fails to deliver the change required, other will do it to us.”

Sir David Normington, the Chairman of the panel, said police officers needed a body to represent their interests.

He added: “We are clear from the evidence we heard that the Federation is not fulfilling that function well enough at the moment and needs major reform. There is an urgent need for it to regain the trust of its members, to be much more open and accountable and adopt the kind of standards of behaviour and conduct which the public expects of police officers.

“If it is to regain its influence, it must put behind it the internal distrust and divisions which are such a feature of its present operations.”

You can see the full report here – View PDF