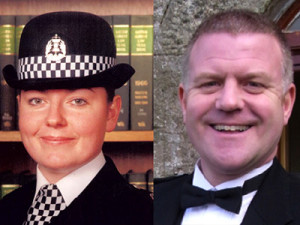 The police service is in mourning following the death of two police constables and a pilot who were killed in the Glasgow helicopter disaster.

Police Scotland’s PC Kirsty Nelis and PC Tony Collins (pictured) died along with civilian pilot David Traill, when their craft crashed through the roof of the Clutha Pub on November 29, killing a further seven people.
They had been returning from a police operation.

An estimated 1,000 people attended Glasgow’s St Andrew’s Cathedral for a requiem mass on Wednesday 11 December in memorial to PC Nelis, 36, just metres from the scene of the tragedy.

Ten uniformed officers formed a guard of honour at the entrance to the cathedral as PC Nelis’ coffin passed by to the sound of a lone piper. The casket bore a police hat and was draped in the Police Scotland flag.

Both first Minister Alex Salmond and Justice Secretary Kenny MacAskill attended the service of the married officer who had received a commendation for her bravery in the past.

Archbishop Philip Tartaglia told the congregation: “We pray for Police Scotland and for the city of Glasgow.”

PC Tony Collins, 43, was buried in Lamlash, on the Isle of Arran on Tuesday 10 December. Mourners were led by his wife Lucy and sons Ryan, 19, Innes, 12 and six-year-old Gregor.

As many as 200 police officers from every police division in Scotland and beyond attended, led by Police Scotland Chief Constable Sir Stephen House.

The funeral of Captain David Traill, 51, was held at Glasgow University on 7 December.

Tributes have poured in for the three from across the police service and the wider world.

Police Scotland Chief Constable Sir Stephen House said: “I would like to pay tribute to all three and recognise the important contribution they made to our public service and to the communities they have served.”

He said it had been “an extremely difficult time for all those affected.” Sir Stephen added: “Our thoughts and condolences remain with the families and friends of the people who have died.”

Brian Docherty, Chairman of the Scottish Police Federation, said: “Our members are unfortunately all to used to dealing with tragedy and delivering bad news but that they performed their duties so effectively in the face of certain knowledge they

were dealing with the likely deaths of one of our own, is a testament to their sheer professionalism and is a credit to the whole of the police service.

“Our representatives will now turn to the job of supporting these colleagues as they come to terms with the aftermath of this incident and of course the families of the aircrew who will be looking for so many answers in the days weeks and months ahead.”

Steve Williams, chairman of the Police Federation of England and Wales added: “When officers are lost in the line of duty it affects the whole of the police family.”

It is not yet known what caused the accident, but enquiries are continuing.