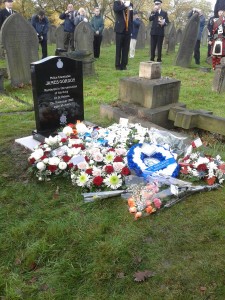 The “forgotten” grave of a “hero” police officer killed on duty 120 years ago has been given a headstone for the first time.

PC James Gordon was attacked with an iron bar as he stopped a gang of men breaking into a boiler works factory in St Helens, Merseyside, in 1893.

Although the 26-year-old’s death is listed in police records, his grave at St Helens Cemetery was left unmarked until a ceremony today.

This marked 120 years to the day from his murder.

Steve Lloyd, the trust manager of The Police Roll of Honour Trust, said: “Although PC Gordon’s name and sacrifice is well recorded, I am sad to say that this brave young officer has lain in an unmarked grave since his death.

“As this is the 120th anniversary of PC Gordon’s death, [we] believe it is both right and fitting that we mark the service and sacrifice of this local forgotten hero.”

“The job of a Police Officer never changes, whether it be by James Gordon in 1893 or Ian Dibell in 2012 it will always be inherently dangerous,.

“We may never know why this local police hero was left in an unmarked grave. The Trust are pleased to be able to mark this brave young Scotsman’s grave so that everyone will know where PC James Gordon lies at rest. His duty well done.”

Superintendent Chris Markey, of Merseyside Police, St Helens Division said: “Every day police officers go about their duty and do not know what their day could bring. PC Gordon’s death is a reminder to everyone that, on a daily basis, officers can be called upon to go into unexpected situations, and show great bravery and courage usually when other people are at the worst moments in their lives.”

Picture thanks to Georgine Whigham