“How much longer can we carry on with this resourcing?” 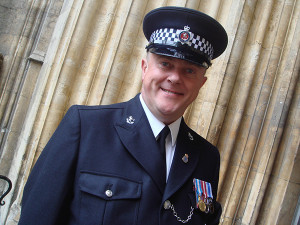 Policing in Kent will “fall over” if police officer numbers drop to the resourcing levels of the 1980s, an Open Meeting has been told.

Ian Pointon, chairman of Kent Police Federation, (pictured) said officers in his force were at “breaking point” and that “morale is not on the floor but rather through it and half way to Australia.”

He told around 200 officers at the meeting that “long term sickness is up” in the force and “worryingly 61 per cent of those currently on long term sick leave are suffering from some form of psychiatric condition.”

He added: “People are on their chin straps. What is amazing is that we continue to provide a first class service to the people of Kent. But for how much longer can we carry on?”

Kent Police currently has 3,200 police officers, said Mr Pointon, but it has seen 500 police officers and 700 police staff “disappear” over the course of the Government’s first comprehensive spending review.

“Any over-population has vanished,” said Mr Pointon. “We know that comprehensive spending review 2 could see another 100 to 150 police officers disappear along with more police staff.

“By the end of CSR2 we have will police numbers closer to the 1980s than those required to police the complexities of the 21st Century. That simply cannot be right – it cannot be right for police officers, our staff colleagues and, more importantly, the people of Kent.”

Mr Pointon told Police and Crime Commissioner Ann Barnes at the meeting that she would have the Fed’s backing to bump out council tax to maintain officer numbers.

He said: “Mrs Barnes you have been openly critical of government cuts, but are you prepared to raise the precept to increase resources? If you do so you will have wholehearted support of this organisation. If we slip back to the resource levels of the 1980s then I fear policing will fall over.”

Also at the meeting in Maidstone on 20 November was Kent Police chief constable Ian Learmonth, who was challenged about the ACPO stance on police officer compulsory severance – a decision which currently lies with the Police Arbitration Tribunal.

Mr Pointon added: “The introduction of compulsory severance will fundamentally change the status of the Office of Constable. It will undermine the independence of that role, an independence that has assured the use of individual discretion linked to a policing style firmly rooted in consent.

“How will holders of the office of constable maintain this independence with the sword of compulsory severance hanging over their heads?

“Whilst there are some that see policing as just another job, its constitutional status and independence of political control is paramount if we are to maintain policing by consent. Such an important and fundamental change must be a matter for Parliament alone.

“Matters of such importance should not and must not be decided as if it was abolishing some archaic allowance.”