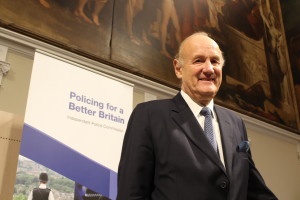 A new deal for police officers and staff is needed alongside a review of the impact of the Winsor pay and conditions changes, a major policing report has stated.

The Independent Police Commission – chaired by Lord Stevens (pictured) – said “necessary” pay reforms had been imposed on police officers resulting in a “damaging stand off between the service and the Government”. The report made 37 recommendations in total.

The Labour Party said it would adopt the “vast majority” of them if it comes to power.

Among other recommendations were that Police and Crime Commissioners should be abolished and replaced and that police force mergers should take place.

The wide ranging review also called for a “chartered” police officer status – registered at the College of Policing – a code of ethics and a national procurement strategy for equipment and IT.

It said neighbourhood policing needs to be protected.

Speaking at the launch of the report on Monday, Lord Stevens said: “As a commission we hope that our conclusions will provide a road map for the professional evolution of our police service – and will serve to guide the integrity, practice and delivery of policing in the decades to come.”

On pay, the £19,000 starting salary for PCs – introduced by Winsor – is rejected in the report. A review and “careful scrutiny” of the Winsor pay and conditions changes is also needed “within two years of implementation”, the commission said.

Lord Stevens added: “Whilst the Government’s reform of police pay and conditions is both important and necessary, the failure to engage the service in the programme of reform has resulted in a damaging stand off and plummeting morale.

“We seek to offer police officers in this country a ‘new deal’ that combines reform of pay and conditions with a serious and sustained effort to give police officers a greater say in the decisions that affect their working lives.

“Police officers should be treated as partners in reforming the police and raising standards – not as the objects of reform.”

Speaking at the launch, Labour leader Ed Miliband said: “This report will not gather dust on a shelf. It is a real plan for the next Labour government.” Shadow Home Secretary Yvette Cooper said a Labour Government would adopt the “vast majority” of the 37 proposals.

Steve White, vice chairman of the Police Federation of England and Wales, said: “The scale of police reform has clearly been too much, too soon and the public and government should be greatly concerned about the detrimental impact this has had on neighbourhood policing.

“It is encouraging that the commission rightly acknowledges that the public still has confidence in its police service and it is imperative that this confidence is not eroded by unsustainable cuts to officer numbers and resources.

“We are now faced with the stark reality that demands on the service have never been greater and the reforms that have been imposed on the service to date are setting us up to fail.”